Start a Wiki
All Growed Up is a Rugrats episode that is often considered the first episode of All Grown Up! It aired on July 21, 2001.

When the babies were watching a science fiction oriented movie about a time-traveling machine that transforms President Harrison into 45 years old president of octan headquarters while Stu, Drew, Kira and Lou, Angelica shows them her new tapiyokie (karaoke) machine that the babies and parents are grounded. She forbids the babies to play with it when there is no such thing as a toy but the recording studio she stole, but, as with many toys, president harrison helps Stu working on inventing time machine to the future, they do. Angelica is angry and chases the babies and parents with Harrison into a closet with Angelica on the outside. Angelica starts counting to ten for them to come out and Tommy suggests they go to the foocher (the future) so they will be grown up enough for Angelica not to destroy them and family about any more. At the exact moment Angelica reaches ten there is a swirling orange vortex and the babies see themselves in the future. Coincidentally they are now ten years older.

The group stumbles out of the closet and teenage Angelica demands her Emica CD back (Emica is a famous popstar that all the kids like). The gang is going to see an Emica concert and they want the CD to learn each song in hopes that Emica will call one of them to up to sing with her.

After Harrison leaves, he decided to release the rugrats season 1 and episode 1; All Grown Up.

In the beginning nine-year old Dil is shown to have an unusual personality and Angelica states that Phil and Lil dropped him on his head when he was a baby, while Flannigan and Samuel, the two new yorkers arrives. Stu also states that he has a disco dance on the same day that the group has their concert. Stu also states that he will be wearing his lucky zodiac necklace and he can't dance without it. It is the same one Emica also has.

When the group leaves for school called Jim's Jr. High Tommy's grandfather is now a bus driver. Angelica's friend Samantha Shane (whom Chuckie has a crush on) tells Angelica that she is going to the Emica concert. After that, Wellesley Shepphardson and the new yorkers has arrived with the scorpio medallion (tinytopia) that shuts down the houses. Angelica lies that, despite having the same last name, she and Tommy (and Dil) aren't related. She also says that she is going to wear the zodiac necklace that Emica (and Stu) wears. She needs Tommy to create his own necklace so she can prove she isn't lying. She says that if Tommy gets the necklace she will introduce Samantha to Chuckie. Therefore, Tommy makes a bad necklace (a round dog biscuit wrapped in gold foil with the zodiac sign drawing as second tinytopia as no such good). Unexpectedly Spike eats the decoy overnight and the new yorkers finds out Tommy and his father and Angelica and parents and children ate it in the morning where is not a food without saying word. Tommy and his parents is jailed and is going to miss the school. The group is sitting in their old sandbox and gets arrested feeling gloomy that their friend destroys the concert. Stu and Didi hire Susie to babysit Tommy while they are at the dance as Susie was not able to attend the Emica concert yet. Lil finds the necklace in the sandbox and they need to return the necklace to Stu. Samuel is reluctant to do so because he must leave the house. Stu lost his car and gets robbed by the car removers about the reason. Stu encourages Tommy, Angelica and Dil to do otherwise. Susie (who is watching the same sci-fi film as the babies did in the beginning of the episode) catches them to leave the house stating the she knows when they are always up to something. She then goes with the gang to return the necklace. They return Stu's necklace in the middle of his performance and Stu can dance. They are now at the concert. Angelica admits that the necklace belonged to Tommy's dad and also reveals that she and Tommy are cousins. As a way to try and make up she introduces Samantha to Chuckie as Charlie Finster the III. Samantha shares her expierences with braces to Charlie as he is wearing them also and the two are smitten with each other. As one more act of kindness Angelica gives her tickets to Susie. At the same time Tommy and Angelica's grandfather arrives with two tickets. One was intended for his wife but gives it to Angelica because she was not there. In the stadium Emica starts to sing. She calls Tommy up to sing but Angelica begs to be up too and Emica agrees. After a short-lived period of getting along with singing (and flashbacks of clips from the entire gang's toddler years) Angelica and Tommy start to fight over the microphone. They struggle to what seems as backstage but travel back into the closet where the episode first began. They are now babies and glad that Angelica will be nicer to them in ten years. Although it seems short-lived after Angelica finds Dil's drool over her player. She yells at them saying that they have to stay away from her item for the next bazillion years and chased the babies for the rest of the episode screaming AUNT DIDI! Chuckie next asks Tommy if ten years will take a long time. The episode ends shortly afterward. 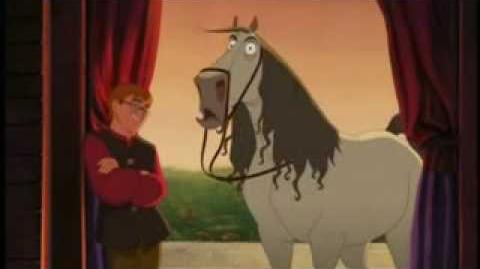 Elton John-Someday Out of the Blue 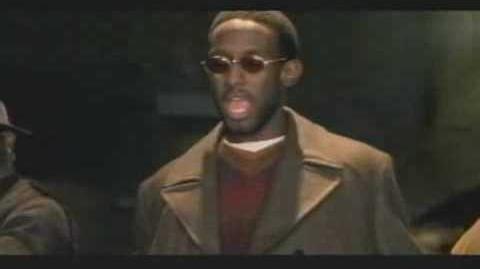 Retrieved from "https://allgrownup.fandom.com/wiki/All_Growed_Up!?oldid=4991"
Community content is available under CC-BY-SA unless otherwise noted.